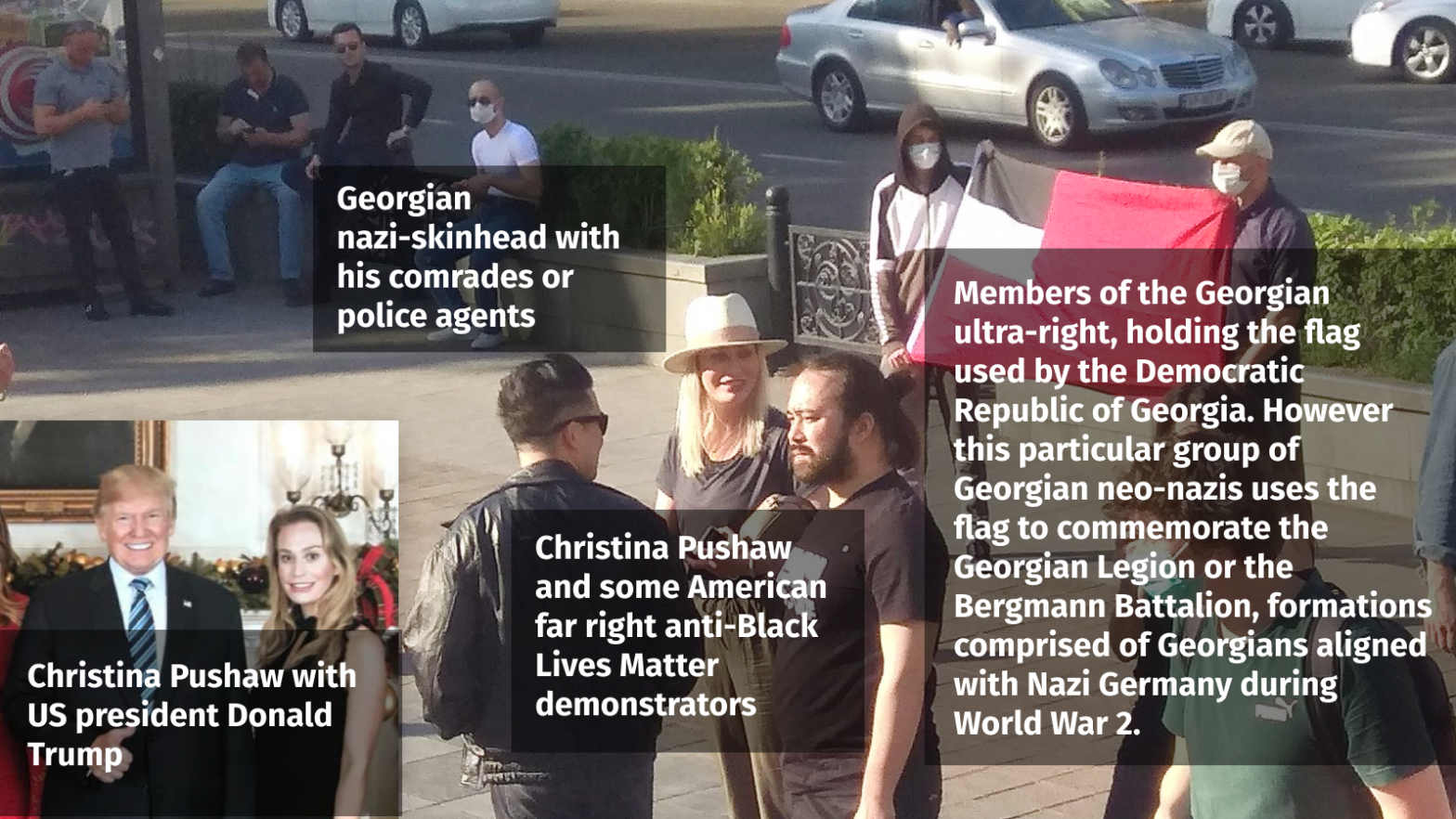 On June 4th in Tbilisi, Georgia, a small nation in the South Caucasus that borders Turkey and Russia, an action was organized in solidarity with the Black Lives Matter (BLM) movement and the widespread struggle against racism and policing in the United States.

Solidarity events were organized in cities around the world. However in Tbilisi Georgia, the peaceful solidarity action was met with unexpected opposition.

In the days leading up to the event, an organized smear campaign was pushed on social media: accusations were made that the goals and intentions of the action were rioting and looting [1, 2, 3, 4, 5], calls were made to inform the Georgian police and security services about these supposedly criminal intentions, and conspiracy theories were spread that the organizers of the action are actually members of the Russian security services. These baseless claims were not accidental inaccuracies – they were deliberate attempts to circulate disinformation and politically sabotage the event.

One outspoken instigator of the coordinated online intimidation campaign, distribution of misinformation and witch hunt was Christina Pushaw, an American political technologist who holds a stridently Conservative, pro-Trump world view, works in Georgia with the opposition movement, and leads a non-governmental organization called the New Leaders Initiative. On her Facebook, though normally in English, she posted an announcement in Georgian – “SOS! Sympathizers of the terrorist organization “antifa” are getting ready to protest (loot and destroy)” –  along with many more similarly provocative and baseless posts in English [1, 2, 3, 4].

As a result, the BLM solidarity action in Tbilisi was accompanied by a group of counter demonstrators which included Pushaw herself, a few ultra-right American expats and a group of racist Georgian skinheads, which in their own words showed up “to support Donald Trump”.

This dangerous precedent is the logical conclusion of the political line Christina Pushaw pursues in Georgia. She exploits her image as a representative of the USA and the West in general, given the pervasively pro-western and pro-American sentiment in Georgian society, in order to push a particular political vision.

But what exactly is this vision? What do her politics mean in the US context? And what does this have to do with Georgia?

Pushaw promotes a conservative, right wing image of the USA and criticizes any liberal perception of America in Eastern Europe and the South Caucasus. For example, she mentions how the average religious “American from Missouri” would find much in common with the rural residents of Kakheti in actively opposing abortion and marijuana legalization. She urges Georgians to not choose between a pro-Western and conservative position – instead it is her goal to synthesize the two. Taken even further, she cites Georgian ultra-conservative Levan Vasadze as an effective example for Georgians to learn from about how to communicate to Americans about Georgia, since he embodies a traditional, conservative and Christian image of Georgia that can speak directly to average conversvative Americans.

On her public Facebook page there are many unsettling posts. In one, she claims an “ironic” pride in the fact that internet trolls called her “Mother of the Natsi Revolution”. While this alone does not say much, her Facebook “friends” wrote approving comments, proudly referring to and celebrating this “title”. These posts are likely jokes – but the approving humor at such a distasteful post has political implications. At the very least the posts revealed the type of right wing people with whom she affiliates in Georgia and the USA. This exposes, at least partially, the ideological world in which she moves and the types of people with whom she associates..

Flirting with ethno-nationalism, neo-conservatism and other positions on the spectrum of the ultra right is dangerous. It is especially dangerous when done by those claiming to represent the USA and the West (though not officially) in Eastern Europe and the South Caucasus. Throughout this region, xenophobic, right wing populism and ethno-nationalism, like elsewhere in Europe, maintain a degree of popularity and influence. Such politics should be challenged, not promoted.

For all the lip service Pushaw gives to “civil society” promotion and development in her articles, on her Facebook and in her lectures, it is clear this is not the essence of her intention. Rather, her goal is to promote a right wing political agenda locally in Georgia, and help develop an image of the West and the United States that compliments this image. While there is a “pro-Russian” far right in Georgia, such as Georgian March with whom Pushaw disagrees, it is only on this foreign policy issue (and Western integration) with which she takes issue. The other aspects of their far right politics do not seem to be her concern. Even her critique of Levan Vasadze is only concerned with his position on Russia.

Within the political landscape of a young Democracy like Georgia, it is hypocritical and unsettling for an American citizen and leader of a politically oriented NGO to publicly malign the Black Lives Matter movement. The movement in the USA is massive, supported by a large and diverse segment of the American population, as well as many politicians, and even  corporations who favor more civil, social and political rights for a historically disenfranchised segment of the population. On top of this it is questionable that someone who so feverishly claims to support civil society would lambast publicly a peaceful, civic action like the one that took place on June 4th.

But Pushaw coming out against Black Lives Matter is the logical conclusion of her politics and what she represents. She does not believe in a West or America that stands for equality, freedom and justice for all – but instead she represents the far right wing of American society. Christina Pushaw embodies the regressive part of American politics which has always stood firmly against racial and social justice.

This petition is a call for all NGOs, publications, educational institutions and individuals who are concerned with racial justice in the United States of America to sever ties with Christina Pushaw professionally.

In particular it is important that the University of Southern California and the Johns Hopkins School of Advanced International Studies are aware how one of their public alumni is representing them abroad.

Publications such as New Europe for whom Pushaw has written, should know that one of their authors was actively engaged in a disinformation campaign to undermine the activities of a healthy civil society. It is rather odd that someone who would write for a media outlet dedicated to “dialogue and transparency” would take on such a position.

Prestigious platforms such as the Warsaw Security Forum which has included Pushaw as a speaker , should end all cooperation. As a respected forum promoting Central and Eastern European security, especially against threats of disinformation, including a figure like Pushaw goes against the forum’s stated goals and values.

Christina Pushaw’s presence in the Republic of Georgia, supposedly “representing” the interests of civil society development and the interests of the United States of America (at least, informally) are paired with an opposition to struggles for racial justice in the USA. Her politics are a dangerous impediment to the development of a better, more equal and just society in both the United States and around the world.

This text was published on Change.org but after half of the year was deleted for an unknown reason.